SPAIN
TBA
A Journey of passion, sacredness, ancestors, magic, discovery, flamenco, and art...
Participation on this journey is by invitation only and space is limited. Explore Spain with like minded people while keeping the freedom to choose different activities throughout the trip. The itinerary weaves a blend of group activities as well as the freedom to explore your own special interests. The wonderful aspect of traveling together is knowing that you are supported and yet you're never alone.

The itinerary follows and if you want more information or to register, contact me at
veralopez@me.com
DAY 1: arrive in Barcelona

​Group gathering and welcome to

The beauty of this particular journey is quality time to explore the sites we most feel attracted to on our own, as well as share the activities planned for the group.

These two days will be filled with sharing the best Barcelona has to offer.
DAY 4 - Montserrat

Montserrat is a spectacularly beautiful Benedictine monk mountain retreat about one hour North West from Barcelona. Not only is Montserrat Monastery of significant religious importance but the natural beauty surrounding the monastery is simply breathtaking.

Today we leave Barcelona at 10:00 and head to the village of Monistrol de Montserrat, we will then take the cogwheel train up the mountain while enjoying the spectacular views of the area.

At the monastery, our guide will take us through a walk to explore the grounds and the main highlights.

Highlights of the Day: 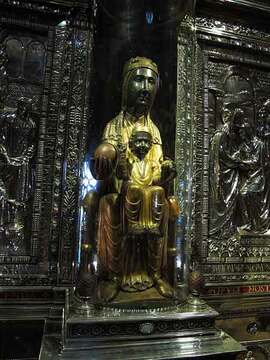 Early morning flight to Seville, after check  free afternoon to walk and explore the enchanted town of Seville

Seville is the capital of southern Spain’s Andalusia region. It's famous for flamenco dancing, particularly in its Triana neighborhood. Major landmarks include the ornate Alcázar castle complex, built during the Moorish Almohad dynasty, and the 18th-century Plaza de Toros de la Maestranza bullring. The Gothic Seville Cathedral is the site of Christopher Columbus’s tomb and a minaret turned bell tower, the Giralda.
DAY 6 - Seville
​
A full day of exploration and fun in the streets of Seville will activate allot of our inner passion and for that we must end our day in the Casa del Flamenco.
DAY 7 - Seville
​DAY 8 -  Seville/Cordoba

After check in our hotel - free day to explore, in group is always the best.

Córdoba is a city in the southern Spanish region of Andalusia, and the capital of the province of Córdoba. It was an important Roman city and a major Islamic center in the Middle Ages. It’s best known for La Mezquita, an immense mosque dating from 784 A.D., featuring a columned prayer hall and older Byzantine mosaics. After it became a Catholic church in 1236, a Renaissance-style nave was added in the 17th century.

One building alone is reason enough to put Córdoba high on our itinerary: the mesmerising multiarched Mezquita. One of the world's greatest Islamic buildings, the Mezquita is a symbol of the worldly, sophisticated culture that flourished here more than a millennium ago when Córdoba was capital of Islamic Spain and western Europe's biggest, most cultured city. Today we suggest the group to take the time to really enjoy this amazing historical site.

DAY 10 - Cordoba/Antequera
Antequera is a city in Andalusia, southern Spain. It's known for its ancient and mystical Dolmenes: the Menga, the Viera and El Romeral.

Granada is a city in southern Spain’s Andalusia region, in the foothills of the Sierra Nevada mountains. It's known for grand examples of medieval architecture dating to the Moorish occupation, especially the Alhambra. This sprawling hilltop fortress complex encompasses royal palaces, serene patios, and reflecting pools from the Nasrid dynasty, as well as the fountains and orchards of the Generalife gardens.

We suggest a group walking tour though the enchanted streets of Granada, best way to really get to know the city.​
Night time is Granada is always another opportunity to experience more of Flamenco, here the show is still performed in the Gypsies Cave.
DAY 12 - Granada

The Alhambra ... an afternoon guided tour.

The Alhambra was so called because of its reddish walls (in Arabic, («qa'lat al-Hamra'» means Red Castle). It is located on top of the hill al-Sabika, on the left bank of the river Darro, to the west of the city of Granada and in front of the neighbourhoods of the Albaicin and of the Alcazaba.

The Alhambra is located on a strategic point, with a view over the whole city and the meadow (la Vega), and this fact leads to believe that other buildings were already on that site before the Muslims arrived. The complex is surrounded by ramparts and has an irregular shape. It limits with the valley of the river Darro on its northern side, with the valley of al-Sabika on its southern side and with the street Cuesta del Rey Chico on the eastern side. The Cuesta del Rey Chico is also the border between the neighbourhood of the Albaicin and the gardens of the Generalife, located on top of the Hill of the Sun (Cerro del Sol).

The first historical documents known about the Alhambra date from the 9th century and they refer to Sawwar ben Hamdun who, in the year 889, had to seek refuge in the Alcazaba, a fortress, and had to repair it due to the civil fights that were destroying the Caliphate of Cordoba, to which Granada then belonged. This site subsequently started to be extended and populated, although not yet as much as it would be later on, because the Ziri kings established their residence on the hill of the Albaicin.

The castle of the Alhambra was added to the city's area within the ramparts in the 9th century, which implied that the castle became a military fortress with a view over the whole city. In spite of this, it was not until the arrival of the first king of the Nasrid dynasty, Mohammed ben Al-Hamar (Mohammed I, 1238-1273), in the 13th century, that the royal residence was established in the Alhambra. This event marked the beginning of the Alhambra's most glorious period.

First of all, the old part of the Alcazaba was reinforced and the Watch Tower (Torre de la Vela) and the Keep (Torre del Homenaje) were built. Water was canalised from the river Darro, warehouses and deposits were built and the palace and the ramparts were started. These two elements were carried on by Mohammed II (1273-1302) and Mohammed III (1302-1309), who apparently also built public baths and the Mosque (Mezquita), on the site of which the current Church of Saint Mary was later built.

Yusuf I (1333-1353) and Mohammed V (1353-1391) are responsible for most of the constructions of the Alhambra that we can still admire today. From the improvements of the Alcazaba and the palaces, to the Patio of the Lions (Patio de los Leones) and its annexed rooms, including the extension of the area within the ramparts, the Justice Gate (Puerta de la Justicia), the extension and decoration of the towers, the building of the Baths (Baños), the Comares Room (Cuarto de Comares) and the Hall of the Boat (Sala de la Barca). Hardly anything remains from what the later Nasrid Kings did.

From the time of the Catholic Monarchs until today we must underline that Charles V ordered the demolition of a part of the complex in order to build the palace which bears his name. We must also remember the construction of the Emperor's Chambers (habitaciones del Emperador) and the Queen's Dressing Room (Peinador de la Reina) and that from the 18th century the Alhambra was abandoned. During the French domination part of the fortress was blown up and it was not until the 19th century that the process of repairing, restoring and preserving the complex started and is still maintained nowadays.

Together we will travel through time to appreciate the beauty of this castle. 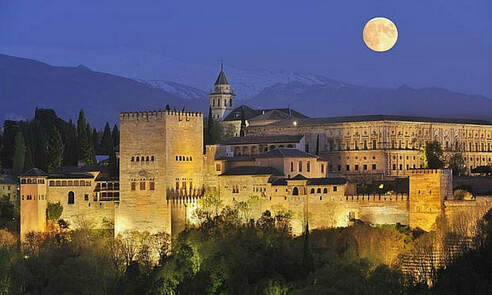 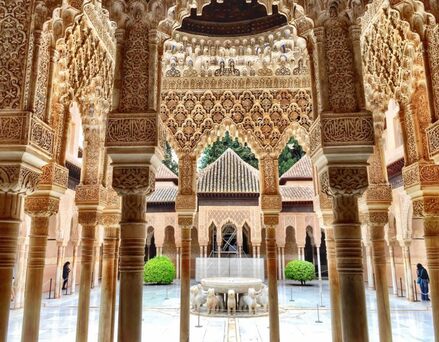 Early morning flight to Madrid... check in and out for a fun day in the Madrid, Spain's central capital, is a city of elegant boulevards and expansive, manicured parks.

Our two days hop-on hop-off bus will allow us to explore Madrid in rich details. Madrid, the capital of Spain, blends modern with the cultural, artistic and the ancient - making this city a perfect destination for the travellers. Madrid’s many prime attractions include the impressive Plaza Mayor (square), the stunning Royal Palace, the Plaza de Oriente and the ‘Paseo del Arte’, famous for its unique museums, palaces and gardens.With our 2 days flexible Madrid Hop-On, Hop-Off bus ticket we can explore Madrid at our own pace. We can sample a wide variety of the finest Spanish and international cuisine or be enchanted by its bars and taverns. Whatever you choose to do in Madrid, you can be sure that you will be affected by the tremendous atmosphere of this great city!​​ 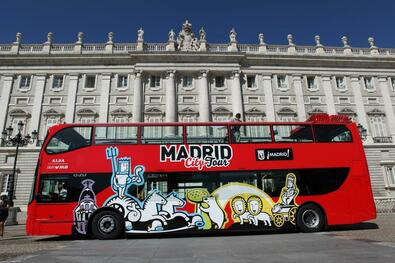 We thank You for choosing to explore Spain with a small group of friends...  well by now, family.

And we hope to see you in another magical place somewhere in this beautiful planet and share more passion, mystical,  and enchanted experiences. 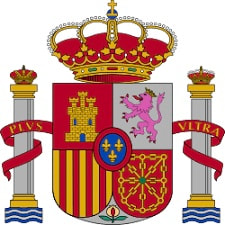 TO LEARN more  and TO REGISTER email veralopez@me.com today.
We would love to dance with you! 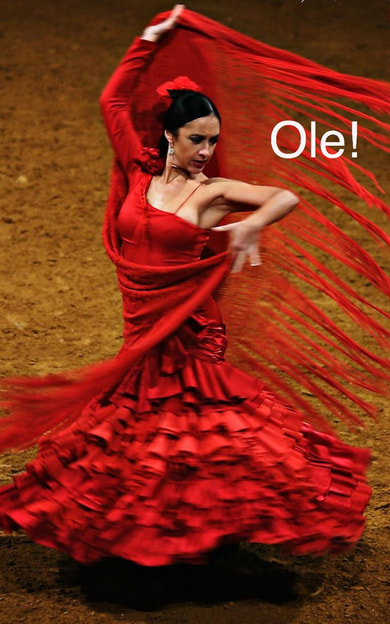