Welcome to the Andean Mystery School
The Andean Mystery School is a highly experiential pathway that allows spiritual seekers the opportunity to study, connect with, and receive the shamanic mysteries of Peru. Compiling over thirty-one years of direct experience, traditional study, and initiation, Vera Lopez will guide you through the mysteries world of the Andes Mountains. Within the Andean Mystery School you will learn how to astral travel to the sacred sites of Peru where you will be able to connect directly with the energies of the Inca Temples and sacred sites. This Mystery School will also allow you the opportunity to receive the Karpay Initiations of Llankay, Munay, and Yachay--allowing you to activate the luminous seeds within your auric field. Guided by Vera Lopez, and inspired by the ancient mysteries of Peru, this mystery school will support you in expanding your relationship with the archetypes, energies and mysteries of shamanic Peru. ​
​

The Q’ero people have lived for centuries in villages at 18,000 feet of elevation, and were thought to have disappeared until they descended from the mountains in the 1950s to share their wisdom and their prophecies with all people. They are known as weavers of the Light, they weave 5th dimensional symbols into their manta cloths, which emanate light and living energy. Their cloths have the same symbols woven into them as those of the ancient Inca. Their language is considered to be over 20,000 years old, and is believed to have seeded ancient Hebrew and Sanskrit, which are the languages of many of our holy texts. They are one of the few civilizations on Earth that still hold their ancient teachings and ancient codes intact, as they have not been influenced or invaded by other cultures. Their history, which has been handed down from generation to generation perhaps for thousands of years, states that they are of the same lineage as the ancient Mayans, Hopi, Navajo, and Tibetans, and their language and rituals share ​many similarities.

The Q'eros have miraculously been able to preserve and orally pass on their sacred Inca healing traditions and ceremonies from one generation to the next. They have successfully been able to keep drawing on the wisdom of the advanced Incan societies that had previously flourished for 1000's of years. They also continue developing the advanced techniques in their arts of healing, divination, and ceremonies and kept a strong connection with the spirits of their homeland while understanding their sacred purpose now has pass the first stage of coming down their high mountain, they are willing to go where their humble presence and teachings are called. Now a days they travel to the four corners of the planet sharing their mesa medicine and Karpay's. Now they will also come to you through the online platform. They understand that the essence of the ancient wisdom will flourish in any heart that is willing to receive and nurture the holy seed, they are willing to give if you are willing to receive.

​A Karpay transmission is where a Paqo (Incan Priest) intercedes on our behalf by invoking the Elemental Beings to assist us in the shift from the human beings we are to the luminous beings we are all becoming. By planting an intentional Luminous seed that literally infuses itself into our DNA, this seed, once given to us by them and fed by us, will grow in our energetic fields and is there to assist us in that transformation process. The Q’ero Karpay assist us by expediting this process exponentially. All who received the gift of their transmissions are instantly initiated Paqos of this ancient lineage and become themselves ambassadors of the Earth. 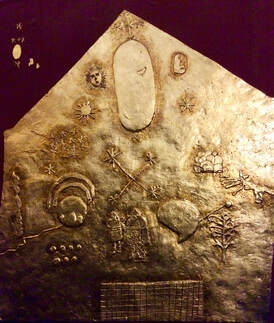 ANDEAN HISTORY
​
In South America, along the Andes Mountains, in the jungles and on the plains; tribes of indigenous people have lived for millennia. These civilizations and groups developed their own individual spiritual and healing practices.
The Andean Civilization is one of five civilizations in the world deemed by scholars to be pristine — 100% indigenous and not derived from other civilizations. It is for this reason that we believe their original spiritual and healing practices are of great significance and therefore worthy of study.

The practices we will study in this course come from Pre-Incan times. They are derived from two civilizations in particular:

These two civilization prevailed until the Incan Empire finally arose in the highlands of Peru some time in the early 13th century and flourished until they were conquered by the Spanish in 1572. The Incan Empire was, by far, the largest empire in Pre-Columbian America. 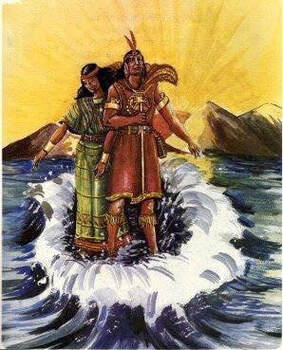 By studying the Pre-Incan people and early Incan practices we can see more clearly the evolution of the elements that morphed into Incan, and transitioned from there to current times.

Not only did the Incan Empire adopt spiritualism and healing practices from the Tiwanaku and the Wari, many of the fundamental ways of life can also be traced back to these ancestors.

Things like:
Throughout our time together, you are going to be learning that the number three is of great significance to the Andean people. We will start with the three Basic Principles:

Ama Sua    forbidden to be a thief / do not steal
Ama Sua means do not be a thief. All that we wish for in life can become reality, but only with honesty and sacrifice. We must be honest in order to obtain what we desire. This phrase in Q'echua sends us a message: we do not have to commit bad deed in order to progress in life.

Ama I-lulla    forbidden to lie / you shall not lie
Ama Llulla means do not lie. Lying is an "anti-value" that is far too frequent among people. We lie so easily, often bringing about a loss of prestige among friends and family members who thought that we were an example to follow. To tell the truth is harder but it gives us freedom. The most important thing is that even without seeking it we will have respect and prestige, just for being sincere. We will reach excellence without doubt.

Ama Quella    forbidden to be lazy / do not be lazy
Ama Quella means do not be lazy. It is a very important command and difficult to follow for many people. Many times we do not fulfill our promises in work, study, or to our family members because of laziness. We should teach our children the love for work. They should know this is key to success in life. If we manage to avoid laziness life will always look upon us kindly.
Those who obeyed these moral precepts went to live in the suns warmth, while those who did not, spent their eternal days in the cold earth.​ 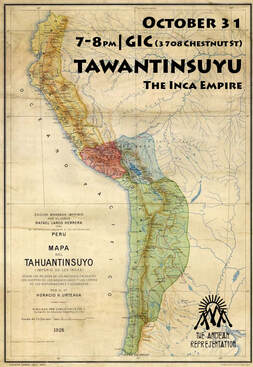 The Tiwanaku and the Wari referred to their world as Tawantinsuyu, "the four regions".

Tawa means four and tin is a suffix naming a group, so that a tawantin is a quartet, a group of four things taken together, in this case representing the four suyu regions or 11 provinces whose corners met at the capital Qosqo (Cuzco).
​
The four suyu were: Chinchaysuyu (north region), Antisuyu (east region; the Amazon jungle), Qollasuyu (south region) and Kuntisuyu (west region). The name Tawantinsuyu was, therefore, a descriptive term indicating a union of provinces.
​INTRODUCTION - PART FOUR
The Empire was an amalgamation of languages, cultures and peoples. The components of the empire were not all uniformly loyal, nor were the local cultures all fully integrated.

They were not known to develop a written form of communication; however, they visually recorded narratives through paintings on vases and cups. These paintings are usually accompanied by geometric patterns known as toqapu, which are also found in textiles.

Researchers have speculated that toqapu patterns could have served as a form of written communication (heraldry, or glyphs), however this remains unclear.

The main form of record-keeping in the empire were qipus (strings of knots). This system allowed for the compact storage of large numbers making their administration, calendrics and engineering highly sophisticated. Their calendars were closely tied to astronomy and they understood equinoxes, solstices and planetary movement very well. They even used qipus to maintain excellent census records, but sadly the knowledge of how to read the qipus was lost as almost all of them were destroyed by the Spanish.
​THE WAY OF THE PAQO - LEVEL I 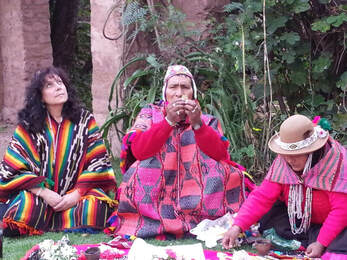 A Paqo is a person who aspires to become a spiritual leader and healer, someone who wishes to hold safe the Great Andean traditions. From this point forward we will use this Pre-Incan word rather than the term Shaman. In Q'echua the word Shaman does not exist. The word Shaman is actually a Russian word. In Q'echua the word is Paqo. A Paqo is a person who dedicates their lifetime to learning and being of service.

In the Andean tradition, there are two preliminary steps that lead to becoming a Paqo. The first step is called kamachy. This is the time when interest or commitment to becoming a Paqo is ignited. A young child who shows promise, or finds they have an interest in it, or is gifted for the calling, will begin their training. Here they will be given the responsibility of assisting a Paqo. Their duties will be to assist with ceremonial preparation, learn the components of healing preparations, become familiar with the unseen and transpersonal realms, and start to build confidence in themselves.

Once the kamachy has demonstrated an aptitude, interest, and skill level during the time they were assisting, then they may enter the next preliminary level of training. To enter this next level, they are given the first rite of a healer - the Mosoq. This heralds the next and most intense level of training the student will receive.

During the Mosoq period, which may last several years, the student will learn in-depth the healing techniques and ceremonial skills. During this period, the student will come to recognize sacred places, sacred objects, and begin the process of making allies with the birds, the animals, the spirits, the mountains, the rivers, the stones - all things.
During this training period, the student must gain unshakable confidence in their abilities - they can have no doubts in their skills, alliances and understanding of the seen and unseen.

During the Mosoq period, we often find that we come face to face with the damage we create for ourselves, for others, and for our environment. Our energy levels drop, our knowledge and confidence falter, we have trouble in our training. Often the student will require a Mosoq Karpay to get beyond this. We will be talking about this           in-depth during our online sessions. 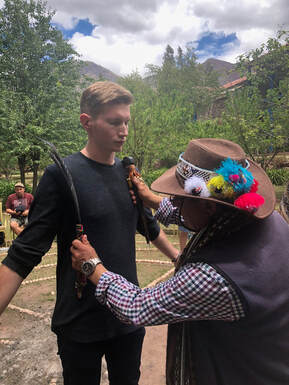 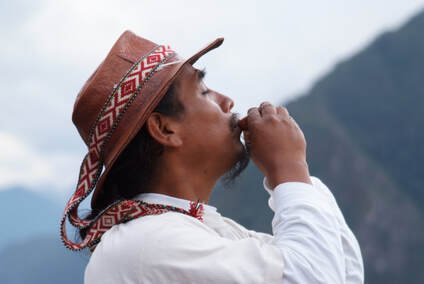